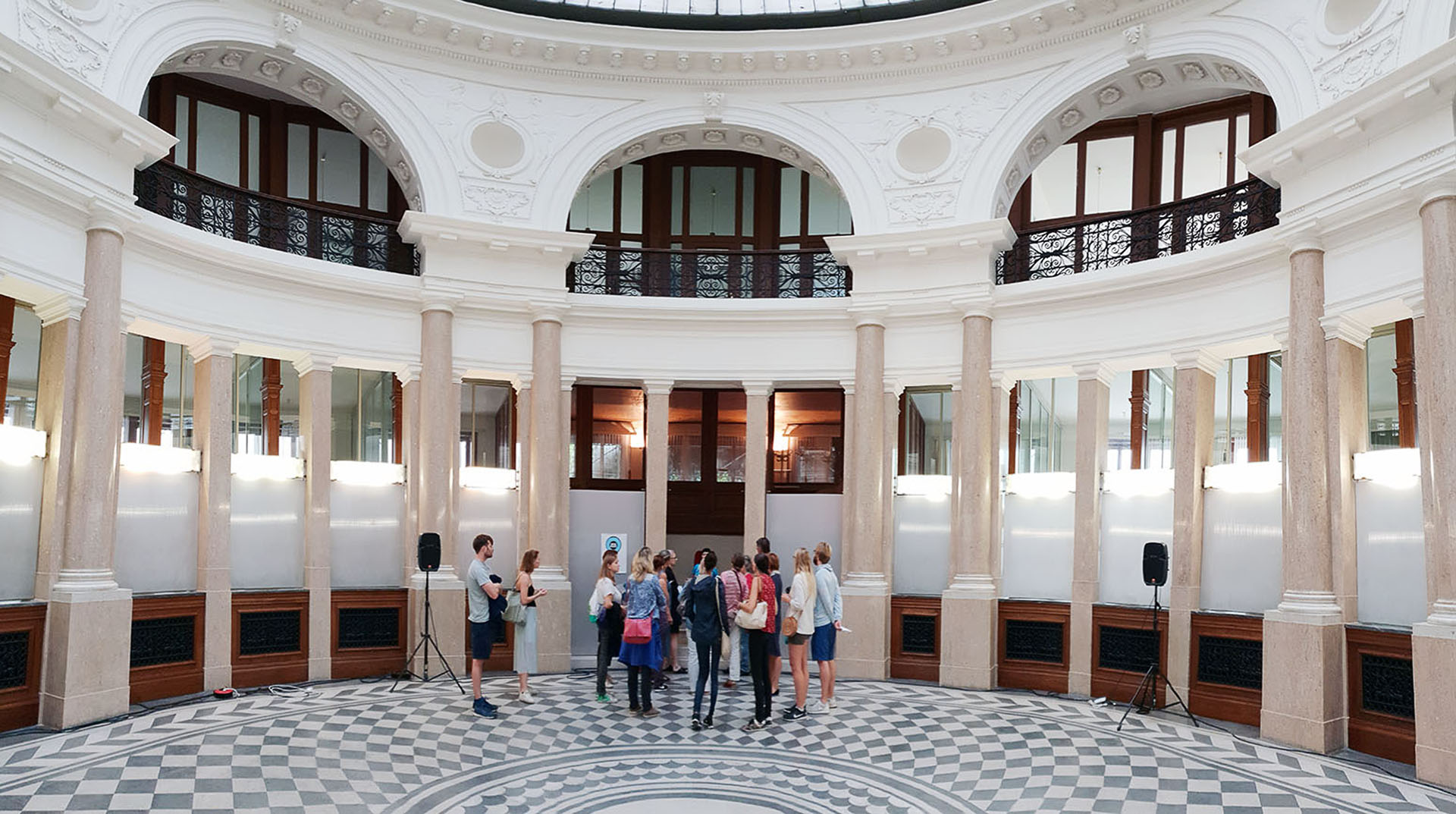 A staircase is a journey, where the steps lead you through the way.

It was planned as a bank building which should project solid seriousness and reliance. Otto Wagner was in charge of the design and managed wonderfully to join functionality and his own aesthetics, marking the beginning of 20th century Viennese architecture.

Completed in 1884, Wagner desgined a circular vestibule, allowing the visitor to enter the space without noticing a turn of about 22 degrees, and instead, providing a feeling of amplitude and open directionality to the center of the building. The handling of light, glass-paneled floors and light-weighted structures, signs of Wagner’s architecture, are already observed here, and were fully developed in his later works towards the Art Nouveau style, as can be found in the Austrian Postal Savings Bank. The second step is a very unique case in Austria. Artists always find a provocative way to shake minds and create new rules according to their special views of the world. Edwin Lipburger created his own republic in the shape of a sphere, the shape with less surface in contact to the ground. The Republic of Kugelmugel was built without legal permission as an artistic statement in 1971, and independence was declared in 1976.

Soon, the authorities claimed for the demolition of the two-floored ball – or Kugel – and Lipburger faced jail for several weeks. The issue became international, and both parts reached an agreement: the Kugelmugel was moved to its current location in the Prater and enclosed with barbed-wire fences. Around 600 people around the world claimed to be citizens of the Republic of Kugelmugel, a micronation within a nation. Now, the building is intended to be a space for artistic exhibitions and has become a part of the collective imaginary of Vienna. The Stenberg Palace was first built in 1820 as a neoclassical building, and then acquired by the noble Bohemian Stenberg family around 1870. Their coat of arms, a nine-pointed star, can still be admired in the façade.

However, history is never a straight line and it often hides a dark side. During the Anschluss, the annexation of Austria into Nazi Germany in 1938, the palace was given to Benito Mussolini, as a kind of a cultural gift intended to strenghten the friendship between the two fascists nations in those convulsive times. After the WWII, the Sternberg Palace held the Italian Cultural Institute and the Italian consulate, until nowadays. The College of Physicians was founded in 1837, while the Billrothhaus opened its doors in 1983, to present and discuss scientific and medical findings within the community. It was named after the surgeon Theodor Billroth. Interestingly, during the Second World War, the society was temporary dissolved, and all the valuable books were kept safe in a neraby barn against the damages of the bombs. Next step: Continue the journey!