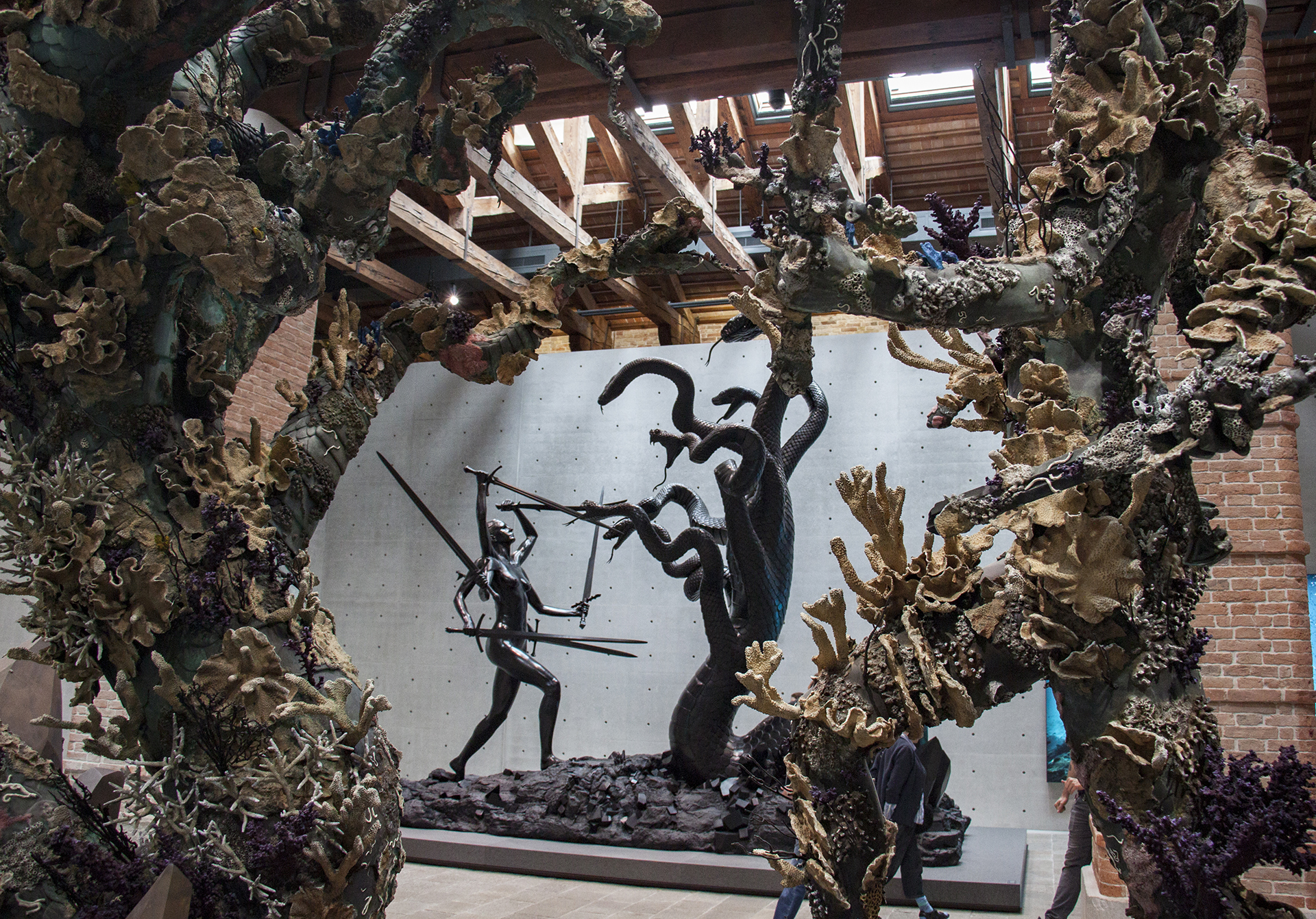 Citing Shakespeare’s The Tempest, Damien Hirst reveals the treasures of his exhibition The Wreck of the Unbelievable at Punta della Dogana in Venice.

The artist proposes an extravagant excercise of believe: all statues, objects and pieces were supposedly sunk in a ship named Apistos and later discovered in the Indian Ocean. Hirst contextualizes all his artifacts inspired by Greek and Roman myths, diving in Aztec roots and Egyptian iconography. At the same time, many pop culture references shatter that feeling of antique wonder he wants us to believe in.

The idea behind Hirst’s hyperbolic proposal is the possibility of truth. We know nothing of this is real in the context of history but it could be, it might be. It is not true, but nevertheless it does exist, and for a second, the actual facts are not so important anymore.

After 10 years of ambitious work, Hirst’s long-awaited comeback has provoked a division of opinons.

The Mermaid, made enterely of bronze, looks like a fake plastic figurine outside the museum, facing the lagoon. The excitement for the exhibition is a real thing, and the visitor is stunned by the magnificent statues, by turns grotesque, beautiful or, even unnecessary. Many of the pieces which were recovered from the shipwreck are covered by barnacles and corals. Cronos devouring his children and Lion women of Asit Mayor as guardians of a temple. One of our favorite pieces was Metamorphosis.

Hirst refers to Ovid and his Greek myths and Arachne, who challenged Athena to a spinning contest. Kafka also treated the metamorphosis issue through an insect. The concept of a classical Venus, with her light folded robe, is well known, but here a fly female hybrid seduces and revolts equally. Pharrell Williams as an Unknown Pharaoh in Carrara marble reminds the visitor the displayed farse. A bust of a beautiful Egyptian goddess can be also found – who looks like Rihanna, even with her actual tattoos! An alluring Sphinx in bronze and Reclining Woman in pink marble.
In Greco-Roman traditions statues of women were so life-like that inspired love in those who contemplated them.

The story of Pygmalion narrates the irrepressible passion and suffering of an sculptor who craved a delightful woman out of ivory. So deep was his love that goddess Aphrodite converted the statue into a real woman. The Fate of a Banished Man (Standing) inevitably recalls one of the most famous ancient sculptures: Laocoön and His Sons. The Trojan group attacked by sea serpents depicts human agony as well as in Hirst’s sculpture, made from a single marble block of 120 kilograms. Skull of a unicorn, in silver, gold and bronze.

Wouldn’t it be great to have real unicorns in Venice? Hirst has not invented anything new but has found an exquisite and mysterious way to sell his own stories. The familiarity of centuries of art is re-imagined in this unbelievable exhibition.

The visitor cannot be truly surprised by the items themselves, but by the how the item is presented, the golden and jade made-up frame: the colossal post-truth art. Keep on reading – The Wreck of the Unbelievable (II) – Palazzo Grassi