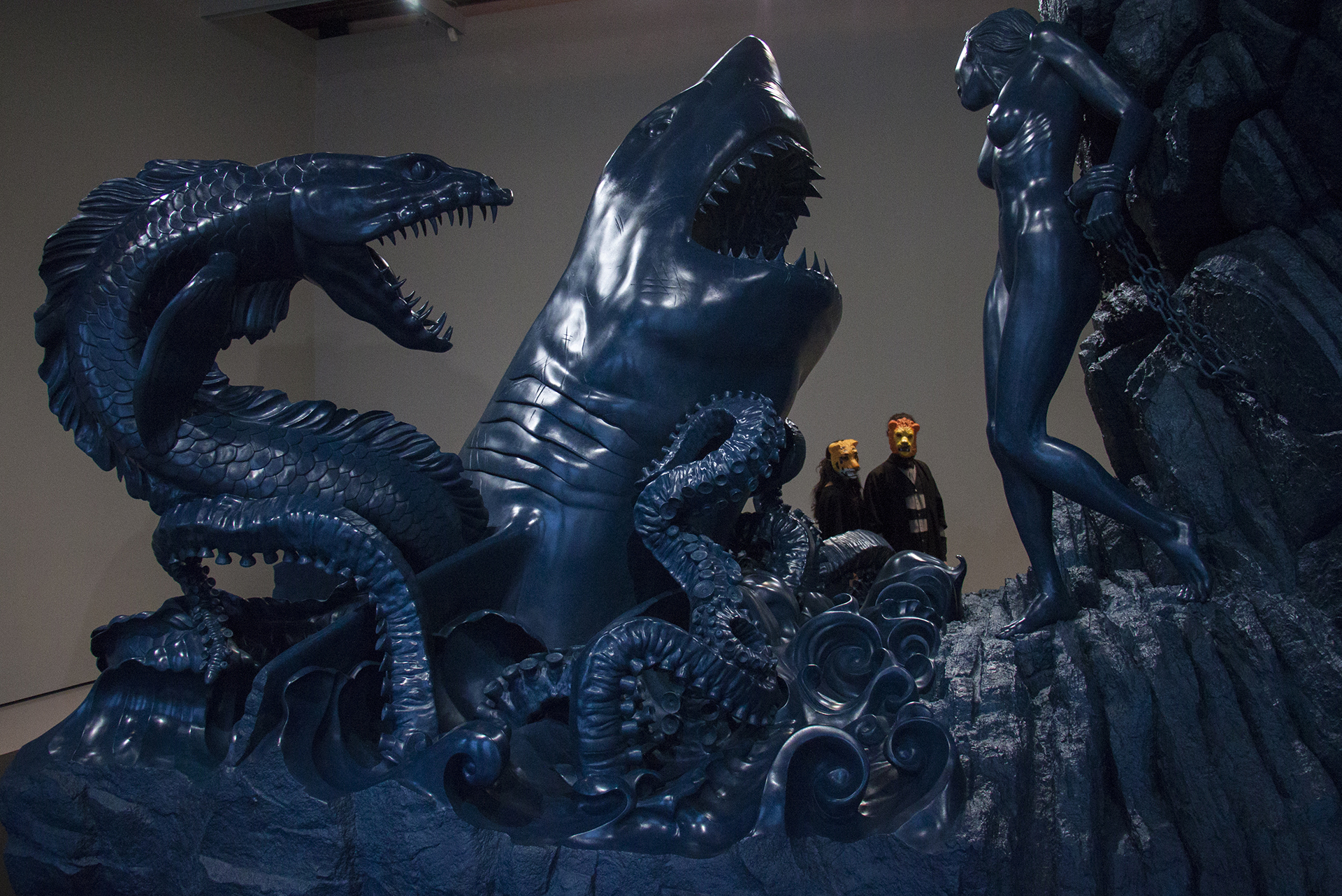 The Wreck of the Unbelievable exhibition continues at Palazzo Grassi with the colossal Demon with Bowl (Exhibition Enlargement). The headless statue is one of the key pieces of the fictional shipwreck; the visitor wonders how this fantastic eighteen-meter resin figure was placed in the Venetian classic palace.

Hirst gets inspired by Babylonian and Mesopotamian demons and theorizes the purpose for the bowl: collecting human blood. Skull of a Cyclops Hathor, with her extraordinary gold and turquoise spread wings. Another of our favourite pieces, along with Metamorphosis (see The Wreck of the Unbelievable (I)), was Andromeda and the Sea Monster, a wonderful bronze composition showing Andromeda chained to a rock and attacked by a Spielberg-esque shark and a sea serpent.

In Greek mythology, Andromeda’s mother boasted that her daughter was even more beautiful than the Nereids. Poseidon, to punish her pride, sent a sea monster named Cetus to the coast of their kingdom. The only way to appease the monster was to offer the queen’s daughter, Andromeda, as a sacrifice.

At the last moment, she was saved by Perseus, who was returning from slaying the Medusa – What a coincidence! The very same Medusa Hirst also displayed in the exhibition! After Best Friends, with Mowgli and Baloo rejoicing in the bare necessities of life, a bronze bust with golden leaves bears an uncanny resemblance to Yolandi Visser, the singer from Die Antwoord. She represents the Mesopotamian goddess Ishtar.
Mickey can be found nearby as well as the Transformers.

Hirst also depicts himself in a corner of the exhibition known as Bust of the Collector. The iconic The Severed Head of Medusa in striking malachite green is another of the images of this fantasy. Fourteen of the world’s most venomous snakes are craved in her shiny mane. Of course, Caravaggio and his amazing Medusa painting casted a long shadow over Hirst. Unknown Pharaoh, in blue granite, gold and white agate. Or how Mr. Pharrell Williams can appear in both museums at the same time and still remain an unknown treasure. In this legendary collection, no living being was used or killed, unlike in some previous Hirst exhibitions.
Is seems that the artist is facing a new stage, and probably, all these unbeliavable pieces have already been sold to both public entities and private collectors.

Hirst presents himself as a storyteller with an exaggerated marine fairy tale. Kitsch, jaw-dropping, tasteless, all at the same time. An splendid underwater fantasy dazzling in its falsity. For REAL.

The Wreck of the Unbelievable (I)– Punta della Dogana