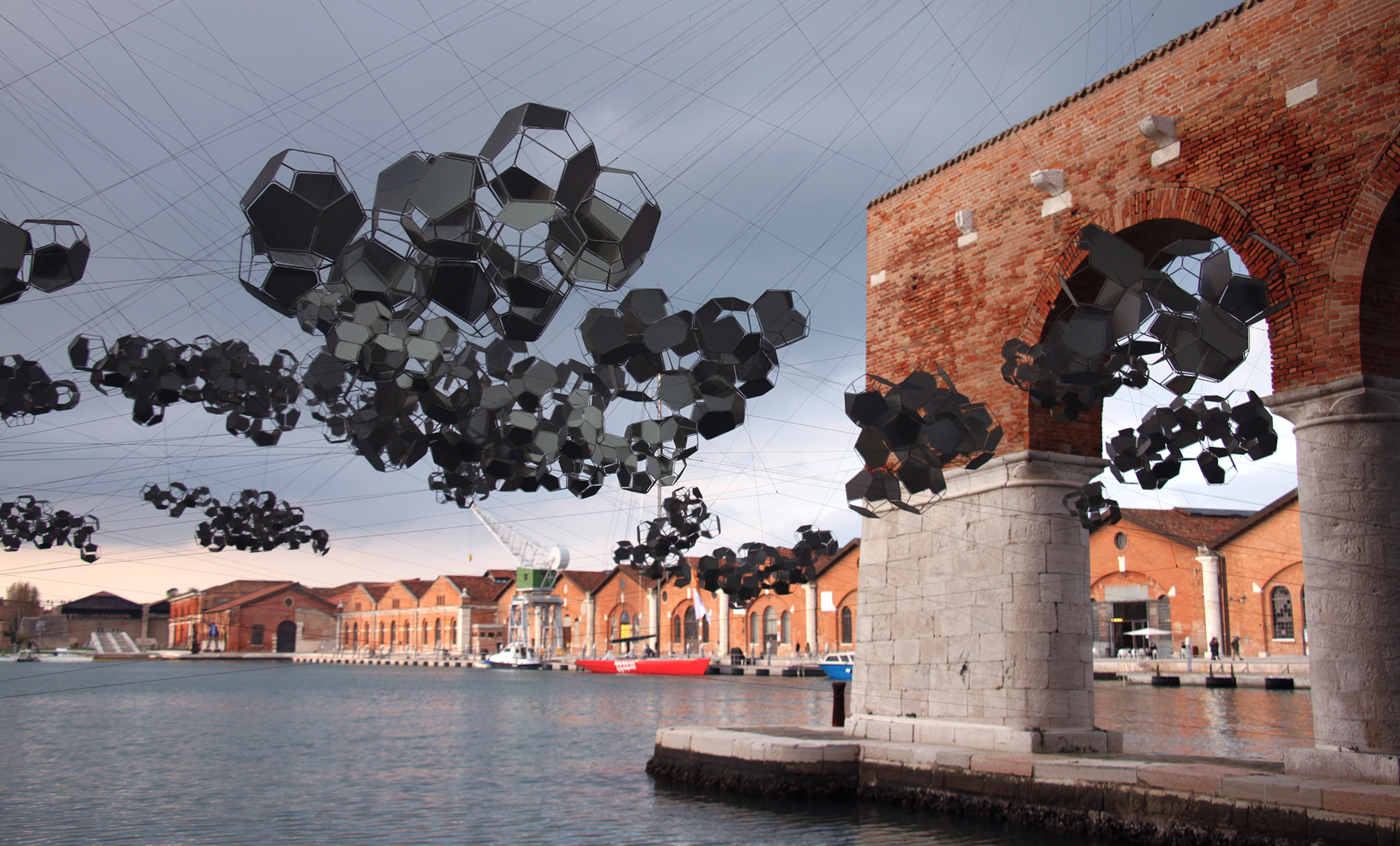 ‘May you live in interesting times‘. With this statement as a trigger point, La Biennale welcomes the visitor with a powerful (and poetic) warning. The times we are living are indeed interesting, but they may be violent and lived as a race against the clock. This year’s exhibition, curated by Ralph Rugoff, explores the role of art in the intersection of AI, technology and humanity.

In words of La Biennale President Paolo Baratta: ‘It is important that, when entering the exhibit, the “public” becomes “visitors,” who then become “viewers” of the works. First, the necessary disorientation, then the involvement, followed by the discovery; it is almost a fencing drill‘.

Art reflects the precarity of present times; it is a form to condemn and express. However (despite mirroring societal problems), it (unfortunately) does not impact politics. This year’s Biennale will transform us into espectators of the ‘so-called‘ interesting times we are living in.

Discover our selection of art across the ancient docks of the Arsenale.

In this series of pictures the artist shows the ruins of modern society: unfinished buildings, abandoned constructions or vacant social housing. All of them have in common that were discontinued projects by lack of funds or due to incompetent urban planning.

The project that Strachan presents in La Biennale at the Arsenale is the outcome of his passion for space travel. It is inspired by Robert Henry Lawrence Jr., the first African-American astronaut, who died in a training accident in 1967, and has remained largely invisible in histories of American space travel. Yet another hidden story made visible and honoured through the means of art.

This piece was erected as a memorial shrine to the suffering during the apartheid times in South Africa. Casting a constellation of shadows, the sculptural installation is made of the wood carved from bird boxes (used by Wa Lehulere in previous pieces). In the artist’s imaginery, bird boxes are home, and represent all the displaced South Africans under the apartheit regime laws.

We continue our visit with this project between sculpture and a botanical model. In the biological art by the Wertheims we can find the work of thousands of collaborators and several materials and techniques. All the time spent to create this crochet reef cannot be compared to the time needed for the creation of actual coral reefs. Home of many oceanic species, they are now endangered by the harms of plastic pollution and global warming, disappearing at alarming speed. Build awareness with your hook!

Mari Katayama‘s photographic and creative world verges around her own persona. Born with a rare congenital disorder that affects the shin bones (and, in her case, her hand), she chose to have her legs amputated at nine years old. Pink prosthetics, real-sized models of her own body made with shiny materials and embellished cushions create her glamourous form of self-expression.

The artist Cameron Jamie (from USA but based in Paris) explores the folklore tradition of the Perchten, associated to the Alpine Christmas tradition of the Krampus. Comissioned to an Austrian artisan, these masks relate to the popular ethnic collections of the beginning of the 20th century.

The Perchta was a goddess, guardian of the wild and the beasts. Her court of followers and spirits were divided in beautiful (Schönperchten), and ugly evil (Schiachperchten) ones, with fangs and horns. With time this tradition evolved, and currently, men dress the night of December 5th to 6th in disguise. With old chains, whips and cowbells, they scare the kids who have behaved badly during the year.

Ikeda uses scientific data from institutions such as CERN, NASA and the Human Genome Project to create a video projection that immerses the viewer into an ocean of visual data. Through the use of mathematical compositions, raw material is processed into digital ‘verses’. The aesthetics of minimalism in its perfect representation.

Anicka Yi, from the Republic of Korea, transforms kelp into a skin like upholstery used to create biomorphic structures, between the organic and the synthetic.

In Barca Nostra the artist presents the remains of a fishing boat that killed hundreds of migrants in 2015. The rusting structure acts as a political symbol of contemporary migration, in which states and reality usually have opposite interests. Even if it can be considered as a controversial piece of art, looking away does not undo what happened – and continue happening – at sea.

La Biennale and its National Pavillions

Besides the main exhibition, in the Arsenale we also find many National Pavillions participating in La Biennale Arte, which freely select their own curated works.

ITALY – Né Altra Né Questa: La sfida al Labirinto (Neither Nor: The Challenge to the Labyrinth)

Curated by Milovan Farronato, the Italian pavillion presents new and existing works by three important artists: Enrico David, Chiara Fumai and Liliana Moro. The title comes from the essay written by Italo Calvino in 1962, in which ‘Literature‘ was assigned the task of creating a dialogue with the future. Thus, accepting the fact that chained labyrinths might be the only ‘way out’. In this exhibit, ‘Literature‘ is substituted by ‘Art‘, giving the visitors the chance to freely chose their ‘way out’ through this labyrinth.

INDIA – Our Time for a Future Caring

Curated by Roobina Karode, this years’ Indian National Participation uses the figure of Mahatma Gandhi, and everything he represents and inspires in society, including artists. His philosophy and ideals, despite having been erected as a paradigm of respectfullness are not yet fixed in today’s violent and intolerant world.

Padukas, Indian slippers traditionally made of wood, have been associated since antiquity with spirituality and reverence. As Gandhi’s padukas, they can be perceived as a symbol of non-violence in the rejection of leather and summon the idea of passive-political resistance through the union of community. Viewed from the distance, they evoke the strenght of single identity, but a closer look captures all the individual stories each walker carries. A path of diverse people unite for self-dignity, peace and freedom.

In Of Bodies, Armour and Cages (2010-2012), Shakuntala Kulkarni represents the threatened status of Indian women using cane armours/cages. This project also reflects on the equilibrium between protection and suffocation, need of safety versus the lack of freedom.

PERU – “Indios antropófagos”. A butterfly Garden in the (Urban) Jungle

This installation offers a creative dialogue between Saudi artist Zahrah Al Ghamdi and natural material she associates with her home. It is an attempt to recognise, reconnect, and revisit a familiar feeling that has changed with time and interpretation. A step into an imaginary world created by the artist to seek comfort in her journey towards self-realisation.

At the entrance of the Arsenale six pairs of arms named ‘Help’, ‘Love’, ‘Friendship’, ‘Faith’, ‘Wisdom’ and ‘Hope’ touch each other. Representing humanity collaboration and our inherent need for true contact.

Cover photo: On the Disappearance of Clouds – Tomás Saraceno
These ‘floating’ structures are based on the geometry of aggregating foam and soap bubbles. They represent the new ‘cloudscape’ left after the waves of climate-crash we are experiencing. The Aero(s)cenes installation oscillates throughout the day at the rhythm of the tides of Venice, performing an elemental choreography. A reflection on alternative ways of inhabiting our shared planet, more sustainable and caring. More info on the Aerocene project here.